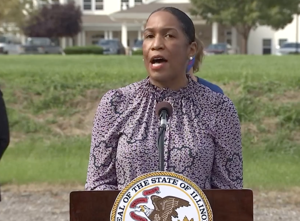 Federal charges have been filed against former Oakbrook Terrace Mayor Tony Ragucci for allegedly accepting thousands of dollars in secret payments in exchange for renewing a red-light camera company’s deal with the city.

Other politicians snared by the feds in connection with SafeSpeed include Crestwood’s former mayor and the late state Sen. Martin Sandoval. The company has not been charged with any wrongdoing.

Julianna Stratton said there will be $122 million dedicated to the Monetary Award Program, which goes to Illinois residents attending an undergraduate program at an in-state college or university. Stratton said the state wants to fix the long-term teacher shortage issue so it is raising investments in education by $12 billion.

Illinois is set to become the eighth state to allow pharmacists to dispense drugs preventing HIV.

Advocates say a plan that passed out of the General Assembly could increase access to lifesaving medication. People typically need to go to an HIV care provider in order to get pre or post-exposure prophylaxis treatment, and some say that is a barrier to many in Black and brown communities.

The bill could allow pharmacists to provide medication and care to people without them having to visit a doctor.

The U.S. Supreme Court Monday declined to hear a St. Louis-based natural gas company’s appeal of a lower court ruling that could close a pipeline that runs through part of Illinois.

The Federal Energy Regulatory Commission granted approval for the pipeline in 2018 and it became fully operational the next year.

The Environmental Defense Fund sued in 2020, raising concerns that the pipeline was hastily approved. Spire’s president pledged to keep the 65-mile pipeline up and running.

A small Illinois community on the Illinois River may be home to the state’s newest millionaire.

According to the Illinois Lottery, a $1 million winning Powerball ticket from Saturday’s drawing was sold at the Circle K in Marseilles, a town of about 5,000 people.

The winner is now the 13th Illinois Lottery player who has won a prize of $1 million or more with Powerball since January 2021.

An Illinois man ended up in the hospital after a routine dental visit after he inhaled an inch long drill bit. Doctors believe that inhaling just before he coughed sent the metal object deep into the 60-year-old’s lungs.

The drill bit was in the man’s lungs for four days before a medical team in Wisconsin was able to navigate his airways with a special device and remove the object.