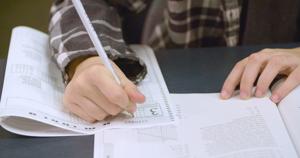 (The Center Square) – Legislation advancing through the Illinois statehouse would prohibit standardized testing for students in pre-K through second grade.

House Bill 5285, also known as the Too Young to Test Act, would eliminate the development and funding of the testing, although school districts could choose to test on their own.

The bill was introduced by state state Rep. Lindsey LaPointe, D-Chicago, following an Illinois State Board of Education proposal that would add the grades to the state’s standardized testing system.

“We need to uphold assessing children to make sure they are learning what they need to learn and help teachers have the tools to know what students need to learn,” Bourne said.

But state Rep. Sue Scherer, D-Decatur, said children that age can get upset because they aren’t ready for standardized testing, including one of her own.

“My daughter came home from third grade and peed her pants and had the best scores in her class, but she was so nervous,” Scherer said.

Thirty-five states offer some kind of testing for K-2, according to a 2019 study from the Council of Chief State School Officers, but many of those assessments are only intended to identify students with learning disabilities.

The bill is now up for Senate consideration.