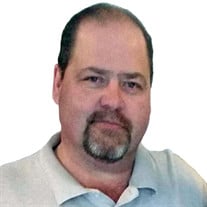 
Bryan “Mooch” Horner, age 56, of Pocahontas passed away on Thursday, December 16, 2021 at HSHS St. Joseph Hospital in Highland. He was born in Centerville, IL on June 18, 1965, the son of Charles and Joyce (Mezo) Horner. He married Beth Cox on March 3, 2000 in Highland and she survives in Pocahontas. In addition to his wife, he is survived by three children: Austin Stone and Ryan Stone both of Pocahontas and Katie Stone and fiancé Todd Eaten of Greenville; grandson Tate Eaten; his siblings: Cathy Simmons of Morrisville, NC, Randy Horner and significant other, Karen of Alhambra, IL, Richard Horner of Marine, IL; half-brother, Butch Horner of Troy, IL and half-sister, Toni Choate of St. Peters, MO; mother-in-law, Darlene Cox and significant other Randy Heuberger of Keyesport; brothers-in-law and sisters-in-law: Gene Cox and wife Kim, Darla Frey and husband Kenny all of Highland, PA Cox and wife Mary of Keyesport, Bobby Cox and wife Rochelle of Shawnee, KS, TJ Cox and wife Brandi of Imperial, MO. He was preceded in death by his mother and father; his brothers-in-law David Cox and Carl Simmons; and sister-in-law, Tammy Cox. Mooch was a huge sports fan, his favorite teams included the St. Louis Blues and Dallas Cowboys. More than any other sport, racing was his all-time favorite, and he spent many nights at the Highland Speedway. He operated Mooch’s Pit Stop in Pocahontas from 1995 until 2005 and made many lasting friendships and great memories there. After selling the bar he worked in car sales in Highland with his current job being at Steven Schmitt Chevrolet. Funeral services will be held at 7:00 pm on Tuesday, December 21, 2021, at Nordike Funeral Home in Carlyle. Visitation will be held on Tuesday from 3:00 pm until the time of services at Nordike Funeral Home in Carlyle. Memorials made in memory of Mooch are suggested to his family, checks can be made payable to Beth Horner and will be received at Nordike Funeral Home, 740 Fairfax Street, Carlyle, IL 62231.