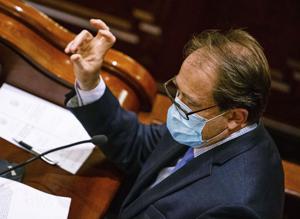 (The Center Square) – The Illinois Department of Employment Security is nearly a month late in filing a report about the state’s unemployment trust fund, according to the Illinois Senate Republican Caucus.

A spokesperson for IDES didn’t immediately respond to a request for comment.

The Republicans said the legislative leaders received a letter from the Illinois Comptroller that IDES failed to submit necessary financial information on the trust fund’s financial activities and is nearly a month delinquent.

“If regular Illinois businesses and families miss financial reporting they are fined and can even face criminal penalties,” said Illinois Senate Republican Leader Dan McConchie, R-Hawthorn Woods. “The governor is not above the law. The UI Trust Fund is deeply in debt and without this report, we have absolutely no idea how big the problem really is.”

“The people of Illinois deserve answers as to why his agency is refusing to provide basic financial numbers on where Illinois taxpayer and federal dollars are going. What is the governor hiding,” McConchie said in a statement.

One unanswered question is how much fraud has been paid out in total.

In the spring, the Illinois Department of Employment Security said they’ve stopped 1.7 million fraudulent claims. But officials couldn’t quantify how much has been paid out.

An Auditor General’s report of the previous fiscal year that included the first few weeks of the pandemic show IDES paid nearly $97 million for Pandemic Unemployment Assistance over the minimum and did not validate wages of all claimants. The report also showed IDES paid more than $41.6 million in benefits to more than 4,500 claimants whose identities were not validated and paid more than $2.6 million to those whose birthdates were the same day or later than the date of the claims. More than $343,000 was sent to 35 claimants who were deceased

Republicans said a full accounting of all the fraud there’s been “cannot be calculated because IDES has not made any figures available or submitted this annual report.”

“It is tremendously unfair to penalize Illinois businesses for fraud perpetrated by criminals and ineptness from the administration in dealing with the fraud,” said state Sen. Sue Rezin, R-Morris.

Illinois’ unemployment trust fund is nearly $5 billion in debt and the interest on that debt is costing tens of millions of dollars. Business groups say if the debt is not paid down using unspent COVID-19 aid from federal taxpayers, there will be increased taxes on job creators.

Illinois was recently ranked the worst tax-friendly state by Kiplinger.

Del Rio, Texas sees illegal immigrants pour in from around the world