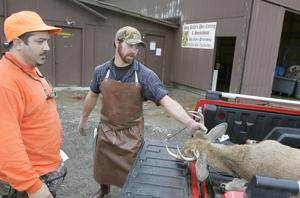 (The Center Square) – A new study of white-tailed deer has found that a high percentage of deer harvested in Iowa a year ago were infected with the SARS-CoV-2 virus which causes COVID-19.

Dr. Rebecca Lee Smith, epidemiologist and veterinarian at the Carle-Illinois College of Medicine, said the high percentage of infected deer is a red flag for hunters this season.

Deer blood and other bodily fluids can splash on a person who is field dressing a deer or handling carcass parts, Smith said.

“If there is splashing or anything like that, that could end up airborne and be breathed in. Or if it is on their hands, hunters can contaminate themselves,” she said. “Avoid handling deer carcasses with your bare hands. Wear a mask. Consider wearing a face shield. Wear gloves. If you have carcass parts left over, you want to bag them and get rid of them.”

The good news is that the deer themselves are not becoming sick from the infection. They are carrying the virus and passing it on to other deer, but they are not getting COVID-19 symptoms and dying, she said. Heat kills the COVID-19 virus, so deer meat is safe to eat as long as it is properly cooked, she said.

Suresh Kuchipudi, Huck Chair in Emerging Infectious Diseases, clinical professor of veterinary and biomedical sciences at Penn State, was one of the primary researchers on the Penn State study. He said 300 samples were tested from deer harvested last year in three different parts of Iowa.

“This is the first direct evidence of SARS-CoV-2 virus in any free-living species,” Kuchipudi said on the Penn State study. “Many urgent steps are needed to monitor the spread of the virus in deer and prevent spillback to humans.”

Smith said Illinois researchers are currently setting up their own deer studies. Exactly how COVID-19 got from humans to white-tailed deer is one of the mysteries that researchers are anxious to figure out, Smith said.

“This is a really strange virus. It affects a lot of different species but not every species,” Smith said.

Smith was struck by the fact that the Penn State researchers found a “remarkably high” number of infected deer.

“It’s not just an occasional deer that was infected. They found 12 different strains of COVID in the deer and they all matched strains that were circulating in people,” she said. “The fact that they found so many infected deer means that the virus is probably circulating in deer, which is another way of saying that the deer are giving it to each other.”

She finds that revelation disheartening.

“Now that we know that it is in the wildlife and that it is circulating at really high numbers in wildlife, it is likely that we will never rid ourselves of COVID,” Smith said.