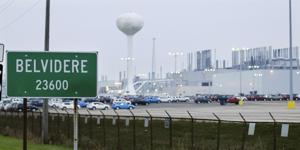 (The Center Square) – Discussions continue in Springfield regarding an incentive package to keep existing auto manufacturers and attract new ones to the state.

State Sen. Dave Syverson, R-Cherry Valley, represents the Belvidere area, home to a Stellantis plant that at one point employed thousands of workers. He says jobs there have been leaking out of the state, but there’s a chance to reverse the trend.

“We want to do whatever we can to keep them here,” Syverson said. “The problem has been Illinois’ jobs climate, like higher energy rates on the manufacturers, higher unemployment workers’ comp, and a higher regulatory environment. The overall cost of doing business is higher here.”

In October, Stellantis informed more than 1,000 indefinitely laid-off workers at the Belvidere plant that they must relocate to other facilities or face termination. Production at the facility has been stalled due to shutdowns caused by a microchip shortage and a pending shift toward increased electric vehicle production.

“The ideal world would be having them convert the current Belvedere plant from a combustion to an electric manufacturing plant,” Syverson said. “And that’s what the package of incentives is to try to make it appealing for them to choose Illinois.”

However, Syverson is worried the current proposal is too small to compete with states that have better overall business climates.

“My fear is that what’s in this bill, while it is an incentive package, it’s not enough of what it’s going to take for us to bring the next wave of manufacturing, which is electronic cars, to bring those jobs to Illinois,” Syverson said.

He argues the goal should be to get the package right rather than to do it quickly, even if a resolution might not come until the spring.

“It’s important that we get this right,” Syverson said. “We really need to look at what other states are doing. Talk with these companies and find out what it is going to take to get them to bring their plants here.”

According to the Illinois Manufacturing Association, the auto industry directly supports more than 30,000 jobs in the state, including work at three assembly plants in Bloomington-Normal, Belvidere, and Chicago.

Syverson says the manufacturing economy has a larger impact on communities than some other sectors.