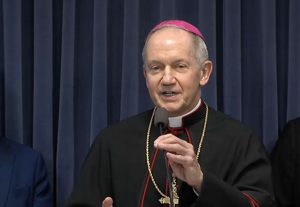 (The Center Square) – The debate continues over the possible repeal of a parental notification law in Illinois.

The quarter-century-old law requires parents to be notified 48 hours in advance when a minor seeks an abortion. The 1995 law did not take effect in Illinois until 2013 after a Supreme Court ruling following years of court challenges by the American Civil Liberties Union.

During a news conference on Tuesday in Springfield, Bishop Thomas John Paprocki urged lawmakers to keep the law on the books.

“This is not exclusively a Catholic issue, essentially it is not even really a religious issue,” Paprocki said. “It is a matter of parental rights and the best interest of children.”

Illinois is one of 38 states that require some form of parental notification or consent. Supporters say it ensures that families are involved in a minor’s health care. Opponents say it delays a minor’s constitutional right to choose their health care.

“It sounds like a good idea but it also puts those vulnerable young people, the ones who don’t have good relationships with their parents, in a very vulnerable place where they have no other option,” said Duckworth earlier this month.

With the law in place, minors are allowed to go through judicial bypass proceedings if a girl feels her family situation is such that telling her parents would result in her harm. A judge then decides if she is mature enough to decide for herself. According to the American Civil Liberties Union of Illinois, since the law was enacted, judges have granted more than 99% of all bypass requests.

Abortion advocates with Planned Parenthood Illinois Action said the law puts some teen girls who do not have ideal family relationships at risk and forces them into court.

Republicans in the General Assembly stood firm in their opposition to the repeal.

“Repealing this law is a clear and deliberate act on parental rights,” state Sen. Sue Rezin, R-Morris, said at a news conference earlier this month.

The Senate could take up the measure this week during the fall veto session.