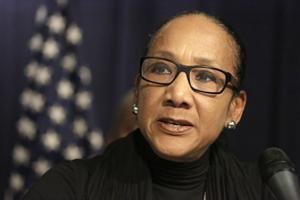 A ghost gun is a homemade firearm without a serial number, which makes it difficult to trace. People can buy kits to make such guns without a background check. Some include no metal parts, thus they don’t trigger metal detectors. They can be ordered online using no more than a shipping address and payment information. Some can even be made with 3-D printers.

Collins’ bill would make owning, selling, or producing a ghost firearm illegal in the state of Illinois. Cook County Sheriff Tom Dart said there is no lawful reason for a person to have this gun.

“There is no other type of reason to have this gun with no markings on it,” Dart said. “Unless you are going to be committing an offense.”

Dart said ghost guns will no longer be legal in Illinois if the measure is adopted by the legislature.

“Guns such as this, that are untraceable are no longer going to be legal in the state,” Dart said. “Individuals that have them are going to face a series of penalties depending on when they are caught with it and things along those lines.”

Cook County has one of the highest rates of gun-related crimes in the nation.

“The last thing we need right now in this community is not just more guns, but guns that can not be traced,” Dart said. “So this new legislation is very straightforward.”

The legislation would not impact other legally owned firearms, Dart said.

Collins said she hopes the legislation is passed quickly.

Brady board member and mother of two children lost to gun violence, Delphine Cherry, urged lawmakers to adopt the measure.

“I urge every member of the General Assembly to take this bill seriously and ensure that it becomes a law,” she said. “Over 1,600 people were shot in Chicago over this summer, our state demands action to help keep families safe, families like mine.”

Cherry said that in 2019, the Bureau of Alcohol, Tobacco, Firearms and Explosives recovered 10,000 ghost guns nationwide.

Neither Dart nor Collins mentioned the number of ghost guns recovered in Illinois. They also didn’t mention how many people had been shot with ghost guns in Illinois.