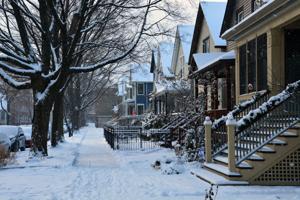 (The Center Square) – Look for a typical winter in Illinois if the Farmers’ Almanac’s winter prediction holds true.

The Farmers’ Almanac has released its winter weather outlook for 2021-22 that has its own set of extremes, earning it a “frosty flip-flop” moniker. Managing editor Sandi Duncan said they make their predictions using a set of rules established back in 1818.

“These rules look at things like sun spot activity, tidal action of the moon, position of the planet, and a variety of other factors,” Duncan said. “Its both a mathematical and astronomical formula.”

The Farmers’ Almanac predicts a cold and snowy January for Illinois, but a much quieter month of February.

“In your area we are calling for icy, flaky conditions, which means there’s going to be near to somewhat below normal temperatures with above average snowfall and there will be some ice mixed in as well,” Duncan said.

The thought of ice should bring the shivers to many in Illinois after the 2021 New Year’s Day ice storm that paralyzed Central Illinois. A thick coating of ice brought down tree branches and power lines. Temperatures did not warm up to near freezing for days, so the ice didn’t melt until several days after.

The National Oceanic and Atmospheric Administration Climate Prediction Center says there is a 70% chance of La Nina returning between November 2021 and January 2022. A La Nina winter could have implications for winter storm activity, flooding and even drought, depending on where you live.

Research shows winter road maintenance can pay for itself in less than a half hour after use. According to research from Illinois Policy, a traffic engineering study showed that applying salt and plowing two-lane roads pays for itself within 25 minutes.

Duncan says people who follow the Farmers’ Almanac weather predictions say they are between 80 and 85 percent accurate.

“Obviously some local conditions could come into play, but we feel pretty confident that we give people a good idea on what’s to come the next two to three seasons ahead,” Duncan said.