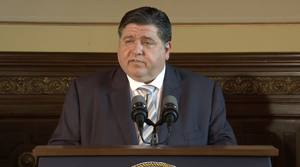 (The Center Square) – Gov. J.B. Pritzker has signed House Bill 1765, a measure designed to prevent police officers and others from conducting background checks on people attending and speaking at public meetings.

The idea for the legislation comes after a 2019 Chicago Tribune report that revealed the Chicago Police Department would run secret background checks on people attending or speaking at meetings before the police board.

Now that practice can carry a Class C misdemeanor for any official who breaks this law, Peters said.

“What this bill makes sure to address is that if anyone is a security concern, they get a background check,” Peters said. “For everyone else, they are able to participate in a public meeting, law enforcement that breaks this law could be charged with a Class C misdemeanor.”

State Sen. Jill Tracy has been opposed to the idea of charging law enforcement with a crime due to the fact that some officers might be running checks in good faith.

Peters said the measure will help people of color connect with law enforcement and will help stop people who mean to do harm from entering a meeting.

“This is for people that pose a threat, if you’re black and walk into a room and get a background check that is not okay,” Peters said. ” At the end of the day, our focus is on people who are knowingly and intentionally causing harm.”

The law goes into effect immediately.