Pritzker announces plans to run for re-election in 2022 | Illinois 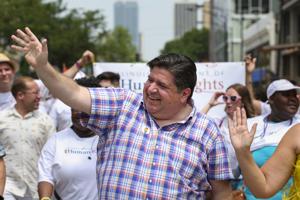 In March, the billionaire Chicago Democrat donated more than $35 million to his campaign fund, so Monday’s announcement wasn’t a surprise. Pritzker’s announcement was met with criticism from Republicans seeking to unseat him in 2022.

“We’ve been through a lot, and I’ve been so proud to see Illinoisans come together during the toughest of times,” Pritzker said in a Tweet on Monday. “I’m excited to fight for the state I love with @JulianaforLG, and there’s no limit to what we can do going forward.”

Lt. Gov. Juliana Stratton echoed the governor in her own Tweet.

“We made history when we won four years ago,” she wrote. “Now, it’s time to continue the fight for the future of Illinois.”

In his campaign announcement, Pritzker said he steered the state through the COVID-19 pandemic and helped residents throughout the state.

“Part of why I’m running for re-election is because I watched the heroes across our state step up and do the right thing. We had so much to accomplish and we were able to do that – together,” Pritzker said in a statement.

“During a global pandemic that required steady leadership, Governor Pritzker failed our most vulnerable in their time of need,” Tracy said in a statement. “When our children missed an entire year of in-person education, Pritzker was silent while political teacher’s unions forced children to stay home even when the science and CDC said they should be back in school.”

Tracy also criticized the governor’s handling of unemployment insurance during the pandemic. More than 1.1 million Illinois residents sought unemployment benefits from March 2020 to May 2020, according to the U.S. Department of Labor.

“When thousands of Illinoisans were laid off from work, they went weeks without help from Pritzker’s incompetent state unemployment agency,” Tracy said.

Pritzker said the hollowed-out state agency responded to the swell in employment claims along with a flood of fraud as best it could given the circumstances.

Tracy also blamed Pritzker’s leadership for the 36 veterans who died from COVID-19 at a state-run home.

“And when our nation’s elderly heroes needed protection from the virus in our state facilities, the tragic mistakes of the Pritzker administration led to the death of 36 veterans at Lasalle Veterans Home,” Tracy said.

An Inspector General report showed repeated failures to follow COVID-19 guidelines at the Lasalle Veterans Home, including the use of ineffective hand sanitizer. Records indicate it took 12 days for an Illinois Department of Public Health official to conduct an onsite investigation of the outbreak. Pritzker fired two administrators after the outbreak.

So far, three Republicans have announced they are running for their party’s nomination to challenge Pritzker. Downstate state Sen. Darren Bailey, suburban Chicago businessman Gary Rabine, and former state Sen. Paul Schimpf have all announced plans to run for governor.

Schimpf criticized Pritzker for high taxes in Illinois, among other issues.

“In three years, J.B. Pritzker has demonstrated he has neither the vision nor the leadership skills to unite our state,” Schimpf said in a statement.

Bailey, who announced his campaign in February, said Pritzker is out of touch.

“Billionaires like Pritzker cannot relate to the struggles of working Illinoisans and families,” Bailey said in a statement. He doesn’t understand the damage his lockdowns did to small businesses, mental health, and working families across the state.”

Rabine said the governor was soft on crime.

“We have a Governor who not only is doing little to make our state safe, but he is also actively working to bring chaos and crime to our neighborhoods,” Rabine said.

“When COVID struck Illinois, Gov. Pritzker demonstrated national leadership, acting swiftly to protect the health of Illinoisans and standing up to the deadly lies of Donald Trump,” Democratic Governors Association Executive Director Noam Lee said in a statement. “As the state emerges from the pandemic, Gov. Pritzker is putting Illinois back on firm fiscal footing, leading to credit rating upgrades and an improving business environment.”