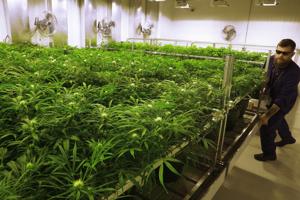 (The Center Square) – Another round of cannabis dispensary licenses going out in Illinois after more than a year of delays.

The state has announced three lotteries to distribute 185 licenses to operate cannabis dispensaries will be held in the coming weeks.

The Illinois State Lottery will conduct the three lotteries on July 29, Aug. 5 and Aug. 19. All drawings will be automated via a computer program and the Lottery will run quality assurance checks before delivering the final results of each drawing to the Illinois Department of Financial and Professional Regulation.

“We want to make sure they go as smoothly as possible and so we have been working every day since this bill was passed really, to try to set up the proper lottery so we get the results that we are all expecting,” Gov. J.B. Pritzker said.

“I’m not satisfied because we have no guarantees,” Ford said. “We are in a better state than before and we are moving in the right direction.”

“Almost all states that have legalized cannabis have done so in a way that produced a multi-billion dollar industry dominated by a handful of corporations and individuals that lack diversity,” said Toi Hutchinson, senior advisor on Cannabis Control. “Illinois is attempting to produce a cannabis industry that actually looks like Illinois.”

Illinois’ own recreational cannabis rollout in 2020 was widely criticized for keeping minorities and those without access to capital on the sidelines for months despite promises from lawmakers to make the state’s adult-use cannabis laws the most equity-centric in the nation.

Last month, Ford compared the situation of minorities owners being left out of the cannabis industry to Juneteenth, which marks June 19, 1865, when the last slaves were freed in Texas, two years after the Emancipation Proclamation.

“There’s not a Black majority owner in the cannabis industry,” Ford said in June. “They are behind. No different than two years after the Emancipation, Black people left behind. What a comparison.”

The applicants will become public upon confirmation of their submission of the required documentation and fees.

Illinois sold more than 2.5 million marijuana products in June, valued at over $115.5 million. According to Marijuana Moment, about $79 million of those sales came from in-state residents, while out-of-state visitors accounted for about $36 million of those purchases.

It translates into a big windfall of tax revenue for the state, with the Department of Revenue reporting $38.7 million in recreational marijuana tax dollars for June.

The state of Illinois collected more than $317 million in cannabis taxes in the previous fiscal year. That far eclipsed the $52.7 million the state collected for the previous year with just six months worth of sales.

Illinois legalized adult-use cannabis with the first legal sales beginning in January 2020. The state has reported continued growth in total sales month after month since then, despite the COVID-19 pandemic and the governor’s orders closing most in-person business for more than two months in the spring of 2020.

The Illinois Department of Financial and Professional Regulation reports total sales for May 2021 were nearly $116.4 million. That’s nearly $1.5 million more than was sold in April.

Total reported sales since January 2020 are more than $1.17 billion. Taxes on cannabis can top 40%, depending on the potency of the product.