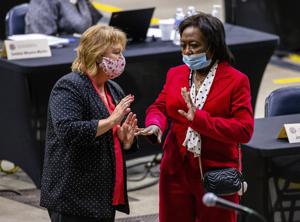 (The Center Square) – For two years, Gov. J.B. Pritzker has used a loophole in Illinois’ political appointment law to shield his picks for the state’s prison review board from legislative scrutiny.

That’s the accusation from a Republican member of the Illinois Senate Executive Appointments Committee.

In their Monday news conference from Springfield, Bryant and Sens. Steve McClure and Jason Plummer said the governor’s office appoints members of the review board and allows them to serve in an acting capacity. Once their two-year time limit nears where they must be considered for approval by lawmakers, they said Pritzker withdraws their nomination and reappoints them, restarting their tenure as acting board members.

“This isn’t OK, it isn’t responsible,” said Sen. Terri Bryant, R-Murphysboro. “It’s a little maneuver that isn’t what our Constitution was designed to allow.”

Pritzker’s office didn’t respond to a request for comment.

“This is a clear and intentional manipulation of the process by the governor of the state of Illinois,” said Plummer, an Edwardsville Republican. “What we have here is an intentional tactic to skirt the process in an effort to hide these individuals from the public and the people of Illinois.”

The 15-member Prisoner Review Board is responsible for approving parole and setting the parameters of a parolee’s release, something Bryant called “an incredible amount of power.”

They said requests to call the parole board members in the committee have gone unanswered. Bryant, who worked at a state prison, said she’s requested multiple times to speak to Pritzker about the issue but has yet to be granted a meeting.

Plummer said his legislation, SB 1475, would require a new appointee to the prison review board to be considered by lawmakers within 30 session days of the appointment or 90 days, whichever comes first.

Under the proposal, failure to meet that requirement would result in the appointee’s expulsion from the board and prohibit them from being appointed for two years.