Some Republicans back election bill to avoid improprieties | Illinois 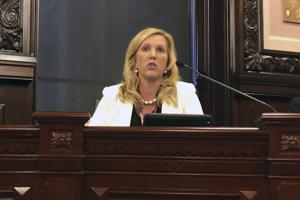 (The Canter Square) – Some Republicans want to instill more confidence in Illinois’ electorate with a new bill to standardize election procedures and make them more transparent.

Election judge training is vague and changes from county to county, according to Turner, but the bill would provide specificity and uniformity.

“We suggested that they need to train them on additional things such as voter verification, campaign-free zones, electioneering, vote-by-mail processing, provisional balloting, ballot handling and processing,” Turner said.

If the bill passed, all training and procedures would be uniform across the state cutting down on confusion, she said.

Turner hopes to increase transparency by posting mail-in-ballot handling procedures online as well as delays in precinct reporting online accompanied by a signed affidavit from an election judge explaining the delay.

“By them posting the procedures of how that is conducted on their website, we’ll alleviate any improprieties in the minds of some of the voters that have cast ballots and it also will help the county clerks with some of the phone calls that they receive,” she said.

In addition to talking to current county clerks, Turner used her own experience as a county clerk to identify what needs adjustment.

“I brought out things that I recalled as a county clerk that bothered me if you will,” she said. “Things that I noticed that could be better in transparency.”

Clerks are getting exasperated with the number of calls they receive from voters wanting to know obscure information about the election handling, Turner said.

“They want transparency and they want uniformity,” she said. “And I think it’s important that we let those people see more of the election process and how it works and what happens to their ballot.”