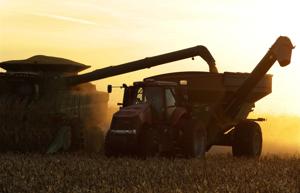 (The Center Square) – Last year was a banner year for Illinois farmers.

The U.S. Department of Agriculture’s 2021 Illinois Crop Production summary shows that it was an excellent year for soybeans, corn and wheat.

The state remains the top producer of soybeans with an estimated yield of 64 bushels per acre, a 9% increase from 2020. Nationwide, soybean production was up 10 million bushels, thanks to higher total production in both Iowa and Indiana.

Illinois farmers planted 11 million acres of corn last year and harvested 2.1 billion bushels, up 3% from the prior year. Illinois is the second leading producer of corn in the country, behind only Iowa.

The USDA says Iowa’s average corn yield came in at 205 bushels per acre, compared to 202 in Illinois.

USDA State Crop Statistician Mark Schleusener said the weather cooperated for farmers in most of the state last year.

“Most of Illinois had plenty of rain in 2021, however, in the northern tier of counties it was really quite dry for some time and they did not get the real good yields up there,” Schleusener said.

Large strides were recorded in Illinois’ winter wheat crop, where harvested acreage in 2021 was up 17%, and total production totaled over 48 million bushels, a 36% increase from 2020.

Despite no major surprises or market shocks in the USDA report, corn, soybeans and wheat prices were all trading lower after the report was released. Market insiders point to inflation numbers as a leading cause.

Marketing of Illinois’ agricultural commodities generates more than $19 billion annually. Billions more flow into the state’s economy from Ag-related industries, such as farm machinery manufacturing, agricultural real estate, and the production and sale of food products.