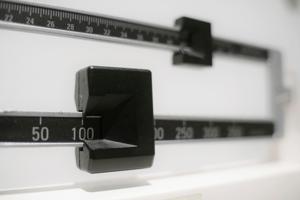 Obesity rates continue to rise across the county and in Illinois.

That’s according to a new report from Trust for America’s Health, a non-partisan organization with a stated mission to promote optimal health for every person and community and to make the prevention of illness and injury a national priority.

The report found more than half of adults in every state were either overweight or had obesity in 2020, the most recent data available. Since 2000, the adult obesity rate in the United States has increased 39%.

“Obesity is a continuing health crisis in the country,” said Dr. J. Nadine Gracia, president and CEO of Trust for America’s Health. “Obesity rates actually worsened during the COVID-19 pandemic. What the data show are that 16 states now have adult obesity rates at or above 35% and that’s four more states than in 2019.”

Illinois ranked in the middle of the pack, with more than 32% of adults in the state considered obese, up more than five points in the past decade. Among black adults in Illinois, that number shot up to 41%.

In Illinois, 34% of men are considered obese, ranking 15th-highest in the county, while less than 31% of women carry the same designation, ranking down at No. 30. The age group with the highest obesity rate was 45-to-64, at 37%.

A recent American Psychological Association survey found that 42% of adults in the U.S. reported undesired weight gain since the start of the pandemic. The average reported weight gain was 29 pounds.

“What we note during the course of the pandemic is that many of the impacts of the pandemic, for example, job loss, then led to loss of income and the inability to afford healthy and nutritious foods,” Gracia said.

The report indicates obesity is a growing problem for children and adolescents.

Nationally nearly 20% of people between the ages of 2-to-19 are considered obese.

“It’s important to address overweight and obesity early on,” Gracia said. “If they are overweight or have obesity in childhood, they’re more likely to be overweight and obese in adulthood. And then they have that increased risk of other chronic conditions that are quite serious.”

She recommends extending COVID-era policies that allow for free, healthy school meals for all and an increase in physical activity for all ages.

“Millions of children depend on school meals for their nutrition and it is often one of the healthiest sources of nutrition and food that they have,” Gracia said. “We also need to ensure that everyone has safe and convenient access to engage in physical activities, such as walking and biking trails, and encouragement of physical activity in schools.”

According to the report, Mississippi and West Virginia have the highest rates of adult obesity in the country, while Colorado has the lowest.