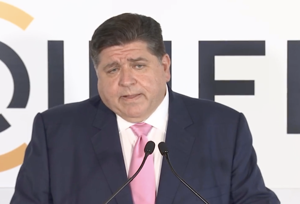 Illinois gubernatorial candidates are expected to use traditional media like TV and radio to get their message out. But, millions have already been spent on social media outlets such as Facebook, mostly by Pritzker.

“Social media, in particular, can be a little deceptive in how ads are presented,” Kaplan said. “Some of the Pritzker ads for example are presented as news pieces.”

One such ad from a Facebook page called “Illinois Daily” that ran an ad between Nov. 1 and Nov. 21 links to a Chicago Tribune article from March 26 with a quote pulled saying Pritzker has “been widely praised by political observers, public health experts and leaders in both parties for his efforts to mitigate the COVID-19 crisis.”

Facebook data shows up to $20,000 was spent on the ad with the disclaimer “Paid for by JB for Governor,” making an impression on more than 1 million Facebook users. There are dozens of similar ads.

Kakie Urch, a professor at the Kentucky School of Journalism and Media, said in the scheme of radio and TV ad spending, that’s a small amount. But with some ads having been seen by more than a million people each, it could still have an impact.

“It’s looking like news, but it is not news, it’s promotion,” Urch said. “That’s not to say it’s fake news, which I think is a different category, but this is definitely a place where you can see confusion with many Facebook users.”

She said voters need to develop media literacy that looks for authenticity and have awareness of the different layers of “influencer compensation or truth.”

Pritzker’s campaign did not return multiple requests for comment.

Illinois State Board of Elections data shows in August, Pritzker’s campaign spent more than $2.3 million with Gambit Strategies. Facebook data shows a page Gambit created in 2018 called “Illinois Daily” spent more than $1.9 million. Nearly $87,000 was spent in the last week. The Republican candidates for governor in the past week have spent a fraction of that for a total of $2,700.

“The governor is starting out with a huge advantage in this,” Kaplan said.

The lead Facebook spender for the Republicans from the past week was Jesse Sullivan, spending $1,700, though all time Sullivan’s campaign has spent $134,000 in Facebook ads.

Businessman Gary Rabine spent around $480 in the past week and nearly $53,000 all time.

Kaplan says while social media spending is expected to be a focus, the big bucks will still be spent on TV and radio ads.

“There’s still a tremendous amount of money being spent on more traditional types of media like radio and TV,” Kaplan said. “J.B. Pritzker, the current governor, for example spent nearly $7 million on advertising including TV, that’s, by the way, more than four times what all his Republican opponents spent combined.”