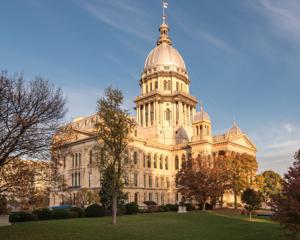 (The Center Square) – An analysis found that before the infusion of federal COVID dollars, Illinois was one of eight states where spending exceeded long-term revenue.

Pew Charitable Trusts looked into financial reports and found that Illinois failed to amass enough revenue to cover expenses between fiscal years 2005 and 2019, the final year before the pandemic and recession.

“The fiscal balance indicator gives us a big picture look at whether states have lived within their means over the long term,” said lead researcher Joanna Biernacka-Lievestro.

The research shows during the 15 years before the pandemic, Illinois took in enough to cover just 94% of its expenses, the second smallest percentage in the country behind New Jersey. Illinois also reported budget deficits in every one of those years.

The other six states that failed to collect enough revenue to cover expenses were Massachusetts, Hawaii, Kentucky, Maryland, New York, and Delaware.

Biernacka-Lievestro said before the pandemic, Illinois was headed down a rocky road, as long-running imbalances can create an unsustainable fiscal situation, pushing off future taxpayers some past costs for operating government.

“A state that has a long-term deficit will eventually have to turn to a mix of tapping into their reserves, taking on more debt, or deferring some payments on their long-term obligations like pensions,” she said.

The typical state’s revenue, composed primarily of tax dollars and federal funds, totaled 102.7% of its annual bills over the past 15 years.

The state with the largest surplus, Alaska, collected 135% of revenue to cover its expenses, followed by Wyoming and North Dakota. Resource-rich states tend to acquire large surpluses in boom years that can help cushion shortfalls when oil or mining revenue declines.

The report notes when a state’s annual income surpasses expenses, the surplus can be directed toward nonrecurring purposes, including paying down obligations or bolstering services.