Some lawmakers want daylight saving time to be permanent | Illinois 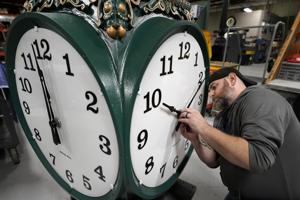 (The Center Square) – It is time to set your clocks back one hour this weekend as daylight saving time comes to an end.

Daylight saving time has evolved over the years. It now starts at 2 a.m. on the second Sunday of March and ends at 2 a.m. on the first Sunday in November. The latest change was to accommodate children so they could trick-or-treat in more daylight, among other interests.

At least seven bills have been introduced in the Illinois General Assembly regarding daylight saving time. Each would either make it permanent in Illinois or make the state exempt from the federal Uniform Time Act.

In the meantime, the Office of the State Fire Marshall is reminding Illinois residents to test, inspect and change the batteries in smoke and carbon monoxide alarms while turning their clocks back this weekend.

The National Fire Protection Association reports between 2014 and 2018, almost 3 out of every 5 home fire deaths in the country resulted in homes with no smoke alarms or non-working smoke alarms. Dead batteries caused 26% of the smoke alarm failures.

“Fire safety is something that all Illinoisans should be thinking about and practicing daily,” said Illinois State Fire Marshal Matt Perez. “The time change serves as a bi-annual reminder to test your smoke and CO alarms and is also a good time to review and practice your family’s fire escape plan.”

A 2017 Illinois law required 10-year sealed smoke alarms to be installed in all homes built before 1988, or that do not have hardwired smoke detectors by January 1, 2023.

“With a long-term 10-year battery smoke alarm, there is no need for battery replacement, saving the average homeowner between $40-60 in battery costs over the life of each alarm,” Illinois Fire Safety Alliance Executive Director Phillip Zaleski in a news release.