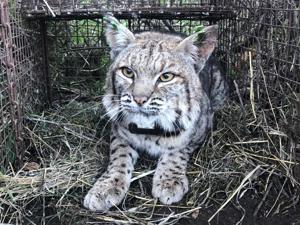 Forty years ago, the wild bobcat population in Illinois was nearly wiped out. To reestablish the species, the hunting and trapping of bobcats was banned. Over many years, the Illinois bobcat population has recovered. There are now thought to be 5,000 to 6,000 bobcats across the state–most of them in southern Illinois, where the Shawnee National Forest is prime habitat for the small cats.

Unfortunately for the bobcats, they are, by nature, elusive and stealthy – making stalking them good sport for hunters. Bobcats are not hunted to fill people’s freezers with meat. Bobcats are prized for their pelts. Stuffed bobcats are popular to display as taxidermy trophies.

In 2015, in his first week in office, former Gov. Bruce Rauner, signed legislation making bobcat hunts in Illinois legal again for the first time since the 1970s. As a result, beginning in 2016, the Illinois Department Natural Resources (IDNR) began holding an annual lottery for bobcat hunting permits. The permits are highly prized by hunters. Every year IDNR gets 6,000 applications for the 1,000 permits that are issued – making bobcat hunting a revenue builder for IDNR.

Thirty out of Illinois’ 102 counties, many of them in the Chicago area, have opted out of the state bobcat hunt by making it illegal to hunt bobcats within their boundaries. This past February, State Rep. Daniel Didech, D-Buffalo Grove, whose 59th District includes several Chicago suburbs, tried to reestablish a statewide ban on the hunting and trapping of bobcats by sponsoring House Bill 1827, to amend the state wildlife code. To the dismay of the Illinois Environmental Council, the Humane Society and Kuroda, the bill was unable to gain traction.

Kuroda said she was disappointed.

“A lot of us believe that bobcat population density in Illinois is not what it should be,” she said. “ If you are going to allow hunting, we believe you should keep it where there is a need for it.”

“I’ve asked them numerous times to share their research and hold public meetings but they are not willing to budge,” Kuroda says.