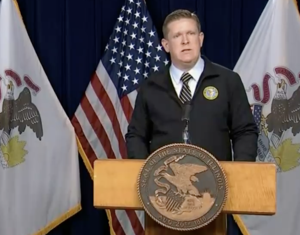 (The Center Square) – After the Illinois State Police convened a commission to increase awareness about the state’s firearm restraining order law, the executive director of the Illinois State Rifle Association says the issue is likely to end up in court.

Three main points were discussed, according to a news release from ISP, including understanding how a firearm restraining order fits into what decisions are made day to day, awareness training, education, and knowledge by both law enforcement and the public, and the infrastructure needed to implement the act.

“This violates the Fourth Amendment and the Fifth, the Second Amendment, the Fourteenth Amendment, because people are being forced to give up their property to the government without due process,” Pearson said.

Pearson also worries this could lead to family members making false claims about another person.

“Sometimes this is used in a vindictive way and not because someone is a danger to themselves or their family,” Pearson said. “When somebody just wants to get even with somebody else, that becomes a problem.”

“Easy access to guns is a significant risk factor for injury and death,” the statement reads. “In response to tragic events across the country, Illinois has made a commitment to addressing gun violence, leading to the passage of the FRO law. This law provides families, household members, and law enforcement a judicial pathway for temporarily removing firearms and prohibiting future gun purchases for the duration of the order.”

The commission will submit an annual report to the General Assembly that includes summary information about firearms restraining order use and challenges to Firearms Restraining Order Act implementation, and recommendations for increasing and improving implementation.