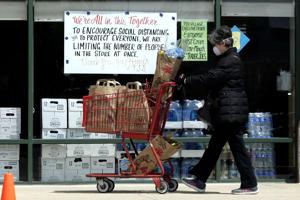 (The Center Square) – As part of the recently passed state budget, Illinois will be suspending its 1% grocery tax, but a new report shows that may not be the best approach.

Gov. J.B. Pritzker proposed a one-year suspension of the 1% grocery tax. Democrats at the Illinois statehouse approved a budget that includes that temporary reduction. A Tax Foundation report states that eliminating the grocery tax doesn’t help low-income families and only gives modest relief to middle-income families.

“It isn’t the best way to do it,” Tax Foundation researcher Jared Walczak said. “You are undermining a good, fairly stable, fairly economical neutral tax with this carve out.”

Walczak said sales taxes are more pro-growth than many other forms of taxation, especially income taxes, so policymakers have an opportunity to increase tax progressivity, enhance revenue stability, and improve economic competitiveness by taxing groceries, providing a credit, and using the remaining revenue base to cut income taxes.

Walczak said a better solution may be to provide a one-time credit which could help the poorest households save on their tax liability.

The Tax Foundation report states that as counterintuitive as it may seem, the lowest decile of households experiences 9% more sales tax liability under a sales tax with a grocery exemption than one with groceries in the base, assuming that rates are adjusted to generate the same amount of revenue from each tax base.

“What is most unfortunate about the Democrats’ budget plan is we have an opportunity right now to provide permanent tax relief for the people of Illinois, yet instead, the Democrats are choosing to provide one-time checks and other temporary relief just before the election which expires right after the election,” Senate Minority Leader Dan McConchie, R-Hawthorn Woods, said in a statement.

Part of Illinois’ budget that Democrats approved are tax credits for families, including a one-time income tax credit of $100, up to $300 for a temporary property tax rebate and credits for low-income families.

Thirteen states currently tax groceries, and of those, only three tax groceries at the ordinary rate without providing some sort of offsetting grocery tax credit.

“Public perceptions regarding grocery taxation are not easily changed,” Walczak said. “In states where groceries are taxed, the policy is not always very controversial, because it is deemed the ordinary condition, at least until policymakers agitate for change. But in states where groceries are exempt, or taxed at a preferential rate, a reversal is likely to meet with stiff opposition unless the public can be convinced of the benefits.”