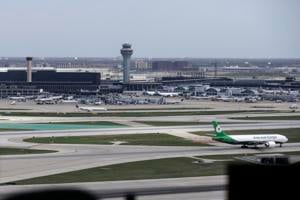 The Illinois Department of Public Health is telling Illinoisans to pay “close attention” to the COVID-19 situation in their local communities with cases on the rise once again statewide.

Several dozen employees of the Illinois Department of Corrections are suing the state over COVID-19 vaccine or testing mandates.

A lawsuit filed in Christian County Circuit Court requests a temporary restraining order. A hearing is set for Friday. The 46 employees work at 18 different correctional facilities run by the state of Illinois.

A bill that could soon be sent to the governor is being celebrated by a construction workers union in Illinois.

A new study shows Chicago O’Hare has the 5th longest TSA wait times in the country.

Luggage storage company Bounce said it analyzed data from TSA and U.S. Customs and Border Protection to find out which airports have the longest waits. There are two lists. One is security wait time and the other includes time spent waiting on passport control. Combined, Miami International Airport had the longest wait times.

Illinois’ jobless rate was slightly down in March, but higher than the national average.

IDES said the industry groups with the largest job gains in the state were Leisure and Hospitality.

Investigation continues into death of 200 birds

Illinois wildlife officials estimate over 200 birds have been found dead at a lake near Barrington.

Baker Lake is home to one of the most significant Heron breeding colonies in the Midwest. While it is the only known location in the Chicago area to be experiencing an avian influenza outbreak of this magnitude, teams have been sent out to other lakes and wetlands around the state in search of possible spread.