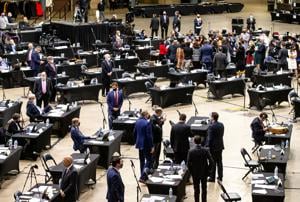 (The Center Square) – After a highly charged debate during the final day of legislative session, members of the Illinois House voted to pass follow up legislation to the SAFE-T Act.

The Safety, Accountability, Fairness, and Equity-Today, or SAFE-T, Act, was approved in the previous General Assembly in 2021. Democrats say it is a holistic approach to combat crime and reform police.

The proposed provisions include changes to the electronic home monitoring that would allow for defendants with ankle monitors to have up to “two periods of time” of free movement.

Another change would give police officers the ability to arrest someone on minor charges if they believe that person is a risk to the community.

“To honor the true intent and objectives of the SAFE-T Act, we put forward these refinements to respect the great people of Illinois and to respect our brave men and women that are implementing these reforms,” Slaughter said.

Republicans have been calling for months to repeal SAFE-T Act, but those calls led to a heated debate between both sides during the early morning hours of the Illinois House session Saturday.

State Rep. Patrick Windhorst, R-Metropolis, argued that there was a lack of collaboration and that the legislation will not do what Democrats are hoping it will.

“This is deja vu,” Windhorst said. “A criminal justice bill at 4 a.m. with no law enforcement involvement and no public input, if you look at this bill it’s not going to do what it claims it will do.”

“The new SAFE-T Act has made Illinois a less safe place to live for just about everyone,” Bourne said. “Something needs to be done to address violent crime in Illinois, but it is clear rushing legislation through the General Assembly was not the right solution.”

Slaughter said Republicans do not care about public safety as long as the violence is in “Black communities.”

“In the Black community, it’s been a state of emergency for a really long time now,” Slaughter said. “But as long as crime and violence are contained in the hood, it was OK, as long as Black folks terrorize other people of color, it was fine. But now, Chiraq is in your communities. And now, it’s a state of emergency.”

The comment was met with objection from Republicans as Slaughter continued.

“We can smell it,” Slaughter yelled. “It is a bad stench of racism coming from the other side of the aisle.”

HB2364 changes passed the House 64-45 but the legislation still needs concurrence from the Senate before being sent to the governor. Lawmakers may not return to the capitol until after the November elections.