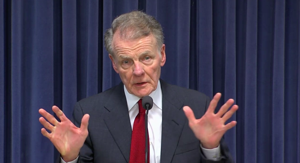 (The Center Square) – An Illinois state lawmaker wants to suspend the pensions of former legislators if they’re facing criminal charges for corruption.

House Bill 5737 filed by state Rep. Amy Elik, R-Fosterburg, says any pension a lawmaker gets in retirement would be suspended if they’re indicted or charged with a felony determined to be related to their service as an elected official.

The bill comes weeks after former Illinois House Speaker Michael Madigan, D-Chicago, was charged with 22 federal counts of corruption ranging from racketeering, bribery and extortion. The charges last month allege Madigan used his public office and role leading the Illinois Democratic party over the span of nearly a decade in a scheme prosecutors called the “Madigan Enterprise.” Madigan has pleaded not guilty.

“Under current law, Madigan will collect a taxpayer-paid pension until a guilty verdict is reached,” Elik said in a statement. “This means Madigan could go on to collect his elected official pension for several years before it’s taken away.”

On Friday, a judge granted attorneys for Madigan and co-defendant Michael McClain, another former lawmaker and longtime Madigan confidant, 120 days to review the evidence in the case. It’s unclear when a trial would start, or how long it would take.

“Corrupt lawmakers should not receive a taxpayer-funded pension if they defrauded the taxpayers while serving themselves in state government,” Elik said. “Suspending pension payments while awaiting the resolution of a case will send a strong message to corrupt politicians that if you break the law, the consequences will be costly.”

Madigan resigned from office in 2021 and started receiving a $7,100 monthly pension in March that year. That increases each year. The Illinois Policy Institute estimates Madigan may receive more than $2.9 million in pension benefits after contributing only $351,000 himself.

Elik’s measure filed Friday has yet to be assigned to a committee. Lawmakers are in session through April 8.