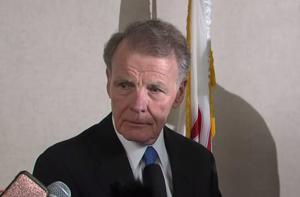 (The Center Square) – A law clerk for the judge overseeing the federal corruption prosecution of former Illinois House Speaker Michael Madigan recused herself from the case, a decision that was called a smart move by a corruption expert.

Madigan, D-Chicago, and his close confidant Michael McClain were charged with 22 federal corruption counts, including racketeering, bribery and extortion. They’ve pleaded not guilty.

During a status hearing in the case Friday in federal court, Judge John Robert Blakey announced one of his law clerks is recusing helself from working on the case because she had previously worked with one of the law firms that is representing Madigan.

“There was no other conversation about what that previous work was,” Blakey said. “She has been recused, I recused her immediately and I walled her off from the case.”

Saint Xavier University associate professor David Parker, a corruption expert, said it’s important that any appearance of conflict of interest be addressed with such a high profile case.

“It’s wise that the clerk recused herself and said ‘hey, OK, I want to make sure nobody thinks there’s anything squirrely going on here that could be damaging to either side of the case,’ and in this case certainly the prosecution,” Parker told The Center Square.

Defense attorneys said during Friday’s status hearing that 120 days should be sufficient to review what they expect to be millions of files of evidence.

Parker said a case covering nearly a decade of alleged criminal conduct means there’s going to be a lot of documents to review.

“Going through the documents, maybe strings of emails, who knew what when,” Parker said. “They’ll have teams of attorneys going through this stuff and looking at it and kind of tracing things along and trying to find chinks in the armor.”

The next hearing in the case is set for Aug. 2.

If convicted of the most serious felony charges, Madigan, 79, could face up to 20 years in prison.

The indictment also seeks the forfeiture of $2.8 million in alleged illegal profits from Madigan.