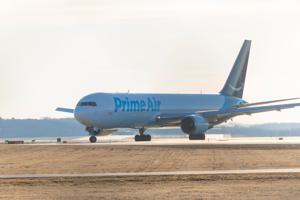 (The Center Square) – Illinois soon could have two airports among the busiest cargo operations in the country.

Rockford’s airport has recorded four straight record-breaking years and likely will join Chicago’s O’Hare in the top 15 when national rankings are updated. Officials say the amount of cargo handled at the facility increased an additional 25% in 2021 to 3.4 billion pounds.

“Our primary business is air cargo,” said Zach Oakley, deputy director of operations for the Chicago Rockford International Airport. “We try to create efficiencies related to that market. And you’re seeing the carriers really recognize that.”

Over the past decade, Rockford has become a Midwest hub for e-commerce and now international freight.

“In 2016, Amazon shows up, which is a large company, obviously growing rapidly,” Oakley said. “They’ve done nothing but growth essentially since they’ve shown up. In 2017, UPS closes their Des Moines operation and moves that all to Rockford and adds the second-day air operation to Rockford. They’ve been growing their presence since then.”

A recent expansion to include international traffic has been a huge boost to growth at the airport, which now serves more than 15 international airlines.

“We’re seeing about 100 to 120 flights a month related to international cargo,” Oakley said. “That’s grown from zero back in June of 2020. But we still have plenty of room to keep adding capacity and adding growth.”

National numbers won’t be released until later this year, but the airport likely will rise from its current number 17 ranking, closing in on the top 10.

“As we continue to grow, that creates new challenges, but we’re nowhere near even close to touching the upper limits of that right now,” Oakley said. “We’re nowhere near seeing the congestion that you see at the large major hubs.”

Chicago’s O’Hare Airport ranked as the 7th-busiest cargo operation in the most recent survey, handling 7 to 8 billion pounds of cargo, while Peoria’s General Downing ranked 115th with 129 million pounds.

“Being close to Chicago, we’re able to access the same cargo companies that are really using O’Hare as well,” Oakley said. “It’s definitely a large advantage for us to be near that large metro area.”

Numbers at Rockford in 2022 continue to show growth, with cargo in both January and February tracking 25% higher than in the same months in 2021.

“Once you get above 2 billion, those are all mostly large hub airports,” Oakley said. “You’re looking at major Metro areas in New York, Los Angeles, Chicago, Atlanta, Houston, Dallas. It’s very impressive when you look at our airport from a cargo standpoint of who we’re close to.”