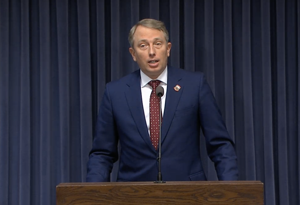 GOP legislators met with the media on Wednesday to urge Democratic members of the Illinois House to help pass several bills they say will provide relief to Illinoisans during record inflation.

“The citizens we represent in Illinois are feeling the impact of inflation and they are looking for some relief from their elected leaders,” Elik said. “Immediate relief can start today, inflation is at an all-time high, and now is the time for our taxes to be reduced.”

State Rep. Patrick Windhorst, R-Metropolis, introduced two bills that are designed to help slow the rapidly increasing price of gas due to inflation. House Bill 5481 would suspend the state’s sales tax on motor fuel when the rate of inflation increases more than 3% over the previous 12-month period. House Bill 5723 would cap at 18 cents per gallon the rate of the state’s sales tax that’s tacked on after federal, state and local gas taxes are applied.

Illinois, with the second highest state gas tax in the U.S. at 39.2 cents a gallon, also tacks on a sales tax for each gallon on top of the gas tax. It is one of only seven states to do so.

Gov. J.B. Pritzker introduced a plan in February to address rising gas and other consumer costs by freezing the state’s automatic annual gas tax that’s tied to inflation, expected to be about 2.2% this year, and suspending the 1% sales tax on food. Pritzker also proposed a one-time $300 property tax rebate.

State Rep. Tom Demmer, R-Dixon, offered his own plan for a $400 tax credit to all Illinois resident making less than $150,000 annually.

“This refundable tax credit for families would provide up to $400 of immediate economic relief,” Demmer said. “It helps them put those dollars towards things that are important and priorities to them.”

Demmer also said he thinks the governor’s plan would not do enough to help.

“I don’t think they go nearly far enough,” Demmer said. “The governor proposed for example a 1% decrease on the grocery tax, that’s a very small amount, and it’s not likely it will be noticed by people when going through the checkout line.”

The Bureau of Labor Statistics reported last week that the Consumer Price index, a leading marker of inflation, rose 7.9% in the past 12 months.