With uncuffed fist in the air and sentenced to 150 days, Smollett says he’s not suicidal, maintains innocence | Illinois 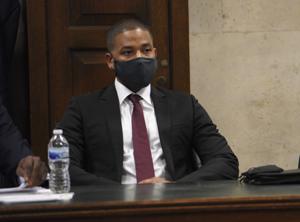 (The Center Square) – Maintaining he’s innocent, Jussie Smollett was sentenced Thursday to 150 days in Cook County Jail for lying to police about being the victim of a hate crime.

The former “Empire” TV show actor was convicted of five of six charges against him in December. He reported to police in early 2019 that he was the victim of a hate crime. Chicago police spent about $130,000 in taxpayer resources investigating the report but found cooperating witnesses that testified Smollett paid them to attack him.

After hours of a sentencing hearing Thursday in a Cook County Court, Judge James Linn sentenced Smollett to 150 days in jail followed by 30 months probation. He gave Smollett a chance to speak.

“If I did this then it means that I’ve stuck my fist in the fears of Black Americans in this country for 400 years and the fears of the LGTB community,” Smollett said, looking around the court room as he stood.

He then said he respected the judge and the jury “but I did not do this.”

Smollett said “if anything happens to me when I go in there, I did not do it to myself, and you must all know that.”

His attorney requested a motion to reconsider the sentence. The judge said the sentence was deliberated at great length. Another of his attorneys requested to suspend the jail sentence in light of a likely appeal. That was “respectfully” denied by the judge.

“The wheels of justice turn slowly and sometimes the hammer of justice has to fall and it’s falling right here, right now,” he said. “This happens right here right now.”

Smollett was then taken away without being handcuffed and with a fist raised in the air.

“I am not suicidal and I am innocent,” he said. “I could have said that I was guilty a long time ago.”

The outcome was quickly recognized by the Illinois House Republican leader.

“State’s Attorney Kim Foxx and Jussie Smollett have undermined and disrespected every person across the country who has been the victim of a hate crime,” House Minority Leader Jim Durkin, R-Western Springs, said. “It will take much time for the wounds they inflicted on the justice system in Cook County to heal, but today the people of Chicago and Cook County finally got the justice they deserved in this case.”

Foxx has been criticized for how she handled the initial stages of the case, eventually recusing herself.