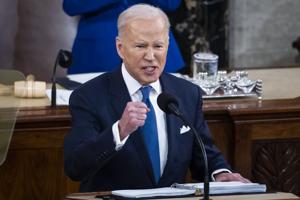 (The Center Square) – Gov. J.B. Pritzker said he agreed with key points of President Joe Biden’s vision for America, including cutting the cost of childcare, expanding electric vehicle manufacturing and the need for action on climate change.

Biden delivered the State of the Union address for the first time in his presidency Tuesday night, tackling a range of issues from the invasion of Ukraine and the status of the economy to funding police and securing the border.

Biden took a shot at the tax cuts passed during the Trump administration, which was met by boos from some Republicans and cheers from Democrats.

“Unlike the $2 trillion tax cut passed in the previous administration that benefits the top 1% … the American Rescue Plan helped working people and left no one behind,” Biden said.

Biden called for background checks and a ban on firearms with high capacity magazines and went out of his way to emphasize the need for funding police as he hit a litany of issues.

Biden touted job creation last year, a result of the rebound from lifting COVID-19-era lockdowns. He also touted his proposal of a global minimum tax rate for corporations.

Biden called for lowering energy costs, child care costs and drug prices, saying Medicare should be able to negotiate the price of prescription drugs, emphasizing the cost of insulin.

The governor, a Democrat, applauded Biden’s “vision of expanding our electric vehicle manufacturing – all while reducing the deficit and avoiding the cost of inaction on climate change. Illinois is already leading and will continue to forge the path forward.”

The governor also said Illinoisans are struggling with inflation.

“From higher prices at the pump to the checkout lane, Illinois families are hurting,” Pritzker wrote on Twitter. “I’ve proposed the Illinois Family Relief Plan to put money back into the pockets of our residents, and I welcome federal efforts to do more.”

Pritzker said cooperation would be vital to taking on the challenges facing Illinois and other states across the country.

“Coming together to tackle our common problems is what democracy looks like,” the governor wrote on Twitter. “The unity agenda puts a spotlight on the opioid crisis, the mental health crisis, the need to do more for our veterans, and fighting cancer. Our solutions are stronger when we act together.”

He also noted “that for the first time in history, there are two strong women behind the podium for tonight’s historic address.”

“I’ll always bet on America – because I’ve seen the resilience, courage, and the hope of our people,” Pritzker wrote on Twitter. “Our government must always put workers, families, and small businesses first.”

Iowa Republican Gov. Kim Reynolds gave the Republican response to Biden’s speech. She compared America today with the America of the late 1970s and early 1980s with soaring inflation, violent crime and a dangerous Soviet Union.

“We shouldn’t ignore what happened in the run-up to Putin’s invasion: waiving sanctions on Russian pipelines while eliminating oil production here at home, focusing on political correctness rather than military readiness, reacting to world events instead of driving them,” Reynolds said. “Weakness on the world stage has a cost, and the president’s approach to foreign policy has consistently been too little too late.

“It’s time for America to once again project confidence,” she said. “It’s time to lead.”

Reynolds turned to domestic issues such as inflation and gas prices, saying, “We can’t project strength abroad if we are weak at home.”

“The president and Democrats in congress have spent the last year either ignoring the issues facing Americans or making them worse,” she said. “They were warned that spending trillions would lead to soaring inflation. They were told that their anti-energy policies would send gas prices to new heights, but they plowed ahead anyway.”