Debate continues on how Illinois should pay down unemployment debt | Illinois 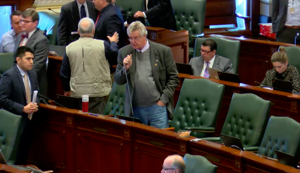 During a House Revenue and Finance Committee hearing, David Harris, director of the Illinois Department of Revenue, said the outlook for revenue estimates for the state in 2023 are positive, but there could possibly be a so-called “Black Swan” event, a rare occurrence that could be a major disruption, like the COVID-19 pandemic.

“Will Russia’s invasion of Ukraine be a Black Swan event that causes disruptions that ripple across revenue streams?” Harris said. “We do not know but the forecasts presented today for FY 2023 are positive ones.”

An economist from the Illinois Department of Revenue said revenues from income taxes, sales taxes and corporate taxes should remain steady. Also included were federal American Rescue Plan Act (ARPA) funds in the forecast, a fact that State Rep. Steven Reick, R-Woodstock, noted is a mistake.

“I really have a problem with the use of this money in any budget projections as being considered revenue for any purpose other than paying down the unemployment debt,” Reick said.

Illinois borrowed billions of dollars from the federal government to make mandatory unemployment payments after Gov. J.B. Pritzker shut down large swaths of the state’s economy at the beginning of the pandemic in 2020. The move led to massive unemployment numbers.

During his budget address earlier this month, Pritzker said he believed in paying off the state’s debt, but did not mention the state’s $4.5 billion unemployment trust fund debt.

If the unemployment debt is not paid by the end of the year, Illinoisans will be on the hook for up to $100 million in interest. House Majority Leader Greg Harris, D-Chicago, said they hope to get a deal done quickly, but didn’t say if that would be before the April 8 scheduled end of session.