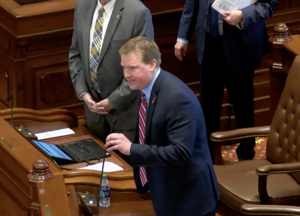 (The Center Square) – Saying private dollars shouldn’t be used to pay public employees, an Illinois lawmaker has introduced legislation that would prevent Gov. J.B. Pritzker from paying state employees out of his pocket on top of the salaries taxpayers already pay for.

Pritzker doles out $1.5 million a year to subsidize the salaries of 15 employees in his administration in addition to the $1.6 million taxpayers pay.

Senate Bill 2213 introduced by state Sen. Jason Plummer, R-Edwardsville, provides that no state employee may receive compensation from any private party for their work within the scope of his or her employment by a state agency.

“Pretty audacious that it is even happening, but on top of that, the complete lack of transparency on the issue is what really caught my attention as well,” said Plummer.

During a recent appropriations committee hearing, Pritzker Chief of Staff Anne Caprara, who is getting more than half of her nearly $300,000 salary from the governor, contended the practice follows all ethical guidelines.

“His priorities are retaining and attracting the best possible people to work for state government and to work for his office personally,” said Caprara.

Pritzker, who ranked 318th on Forbes 400 richest people in America list in 2021 with a net worth of $3.6 billion, is heir to the Hyatt hotel chain.

Plummer notes historically speaking, if public servants were receiving compensation from private sources, normally that would be considered bribery.