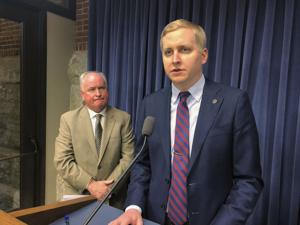 (The Center Square) – Some of Gov. J.B. Pritzker’s staff met with the Illinois House Appropriations Committee to discuss the governor’s recently proposed budget, and who will be part of negotiations.

The governor’s proposed budget was released earlier this month and includes $45.4 billion of state spending with the prospect of $1 billion in temporary tax relief.

During his budget address Feb. 2, Pritzker said that those without the state’s best interests in mind will not be at the “grown-up table” regarding negotiations.

“During this budget cycle especially, seats at the grown-up table will be off-limits to those who aren’t working in the public’s best interests,” Pritzker said.

State Rep. Tom Demmer, R-Dixon, said the lawmakers and the governor should be working together on what’s best for the people.

Deputy Gov. Andy Manar told Demmer the governor and his staff have been working alongside lawmakers from both sides of the aisle.

Demmer also asked the staff if paying down the state’s large debts would be considered as “in the best interest of its people”.

“It would be in the public best interest to ask about our unpaid debts the state has and what our plan is to address these unpaid debts,” Demmer said.

Manar responded to Demmer’s question by telling him to look at this year’s budget as well as previous budgets.

The governor’s budget includes a temporary, one-year freeze of a 1% sales tax on groceries, a temporary freeze of the annual gas tax increase set for July 1, and a one-time property tax rebate program for Illinois homeowners of up to $300.