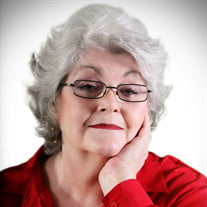 
Carolyn Elizabeth (Garner) Wuebbles of Beckemeyer, Illinois was wholly restored to her Savior and Father on Saturday, January 29, 2022 miraculously surrounded by her children. Carolyn was born in Breese, IL on July 12, 1946 to Jerral and Carrie (Turner) Garner. Her father tragically died she was four years old, and her mother, Carrie, later married Richard Brink. Together they raised Carolyn and six siblings, three of whom have preceded her in death, Jerral Garner, Stanley “Steve” Garner, and Michael Garner all formerly of Beckemeyer. Also preceding her in death is her niece, Tracy Garner Williams and nephew, Ryan Eugene Berry. On November 14, 1964, Carolyn married Jerral “Jerry” Wuebbles, son of Frank and Marcella Wuebbles; all have preceded her in death. Carolyn leaves behind four children, Lori (Keith) Sheets of Carlyle, IL, Scott (Jennifer) Wuebbles of Pinckneyville, IL, Carrie (Kevin) McCarron of Belleville, IL, and Clay Garner Mitchell of Carlyle, IL. Carolyn will go on through nineteen grandchildren, Andrea Elizabeth Baggett of Carlyle, Wyman (Heather) Sheets of Germantown, Emily (Jake) Hammel and Sam (Brooke) Sheets all of Carlyle, Abby (Dylan) Sheets of Beckemeyer, Trevor (Megan) Wuebbles of DuBois, Travis (Kari) Wuebbles, Trent (Hannah) Wuebbles, and Trey (Ali) Wuebbles all of Carlyle, Bridget (Jonah) Shawgo of Soulard, MO, Branden Blankenship of Pinckneyville, Michael (Anna) Wuebbles of St. Louis, MO, Ross Wright of Carlyle, Logan & Hannah McCarron of Belleville, Keyton Mitchell – Freshman Running Back at Illinois College in Jacksonville, IL, and Kaia & Krislyn Mitchell and their mom, Amber Metcalf all of Salem. She also leaves behind twenty great-grandchildren; a sister, Linda Garner of Carlyle, and two brothers, John (Carolee) Brink of Lufkin, TX, and Mark (Randy) Brink of Champagne, IL. Carolyn also leaves behind numerous close friends, prayer partners, and collaborators for Christ. You know who you are, and, so do we. We were able to be with our mother and know that during this trying time that was nothing short of a miracle, however, some family friends must be mentioned by name including Aggie and Daren and Felicia Fields. A Celebration of Carolyn’s life will be held from 12 pm until 2 pm on Saturday, February 5, 2022 at Nordike Funeral Home in Carlyle. Memorials made in memory of Carolyn are suggested to menstandingpositive.org (501C3) and will be received at Nordike Funeral Home, 740 Fairfax St., Carlyle, IL 62231.