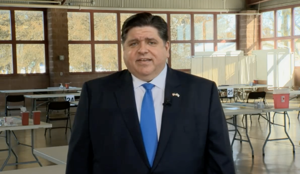 Governor’s budget speech to be in person

Gov. J.B. Pritzker says he plans to deliver his State of the State and budget address speech in person next week.

The constitutionally required speech in front of a joint session of the General Assembly is scheduled for Feb. 2.

With tax receipts running better than expected, it remains to be seen whether Pritzker will follow the lead of New York’s Democratic governor and include some form of relief for Illinois taxpayers.

Illinois has a long history of being known as one of the most corrupt states in the country. Legislation is being introduced to address one aspect of corruption.

Illinois Senate Republicans want to prohibit General Assembly members from lobbying for 12 months after leaving office. The current rule is six months. Legislators would also be prohibited from negotiating employment with a lobbying firm during their term.

Teachers in one of the largest school districts in Illinois appear to be ready to walk off the job.

The teachers union in Champaign released the results of a strike authorization vote, saying members voted in favor of continuing strike discussions.  Of the 733 teachers that voted, 91% voted to authorize a strike.

A sticking point in contract talks has been the school district’s proposal to extend the school day for elementary students by 50 minutes.

The unemployment rate decreased year-over-year in all 14 Illinois metropolitan areas in December, according to preliminary data released Thursday by the U.S. Bureau of Labor Statistics and the Illinois Department of Employment Security.

The metro areas which had the largest percentage increases in total nonfarm jobs were the Carbondale-Marion area and in Kankakee.

A Wisconsin judge is set to hear arguments Friday on whether prosecutors should return the rifle Kyle Rittenhouse used to shoot three people in self defense during a street protest and rioting in 2020 in Kenosha.

Two men died in the shootings. A jury last year acquitted the Illinois man of multiple charges, including homicide.

Many parts of the Land of Lincoln are getting a dose of winter Friday.

Lake effect snow may dump up to 8 inches on parts of Chicago. Snow was reported from northern Illinois to downstate Metro East.

The white stuff won’t stick around for too long as many parts of the state will see above freezing temperatures early next week.