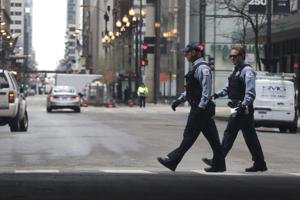 (The Center Square) – Illinois lawmakers and representatives from several law enforcement agencies are discussing possible solutions to help curb violence in the state.

The House Public Safety and Violence Prevention Committee held a hearing on the matter Friday. Committee members said they are looking to take a bipartisan approach to solve issues involving law enforcement, according to State Rep. Dan Ugaste, R-St.Charles.

“I think no matter what, Republicans or Democrats realize that we have to address these issues together,” Ugaste said. “Our approaches may sometimes be different but I am hoping we can find common ground.”

A lot of the committee’s discussion revolved around addressing staffing issues among police departments across the state.

Marc Maton, who is the chief of police in Lemont, said that officers are leaving the profession due to pension issues and lack of benefits.

Over the past few years, Illinois has seen a police officer shortage in parts of the central region as well as in Chicago.

“Kentucky just passed a law that no longer had law enforcement officers having to pay income tax,” Kaitschuk said. “Those are the type of things that I think if nothing else, will send a statement from the General Assembly stating we have got your back.”

The state has seen a historic rise in crime this past year with violent crimes and carjackings increasing dramatically. The city of Chicago saw over 800 murders in 2021 alone.

“In the General Assembly, we need to tackle tough issues every day and I think that our number one job is to build an Illinois where all people feel safe,” Hirschauer said.

Hazel Crest Police Chief Mitchell Davis as well as Maton both called for improvements in police technologies to help solve and prevent crime.

“Our strategy should be to use laws, tactics, and technology to defeat the anonymity of crime and move the risk-reward equation back north of the center,” Maton said.

Davis said the use of speed cameras would help diminish the rate of crime on the state’s expressways.

“I think the most fundamental thing we can utilize is technology,” Davis said. “A prime example would be the use of speed cameras.”

The city of Chicago is currently one of the only cities in the state that implements the use of speed cameras.