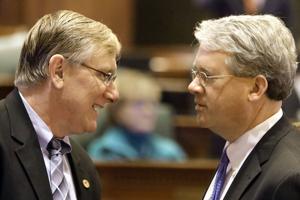 (The Center Square) – While fully supporting the efforts to make it a Class 1 felony for someone to harm a social worker, Republicans are critical of statehouse Democrats for seizing on a tragedy to champion the move.

After the stabbing death of Department of Children and Family Services worker Deidre Silas Tuesday in Thayer just south of Springfield, Gov. J.B. Pritzker released a statement Thursday with Democrats and Republicans in support of making it a Class 1 felony to harm a social worker.

“I’m working with the General Assembly to enhance the penalties for adults who harm DCFS workers to align with the protections for other first responders,” Pritzker said in a statement.

Pritzker’s news release said legislators were “to introduce” Senate Bill 3070. The bill had yet to appear on the Illinois General Assembly’s website as of Friday afternoon.

“We all deserve to work in peace, freedom and under safe circumstances, and I am committed to protecting those who work in this field,” said state Sen. Doris Turner, D-Springfield.

“I look forward to sponsoring legislation that would ensure the protection of DCFS employees the same way that police, firemen, private security employees, correctional officers, and community policing volunteers are protected under the law,” Greenwood said.

It’s unclear when lawmakers will return to take up such legislation.

This comes after years of Democrats blocking Republicans’ efforts to do just that.

State Rep. Tony McCombie, R-Savanna, said it’s about time there’s movement on enhancing such penalties. She’s been pushing for that since the death of DCFS worker Pam Knight in 2018, but Democrats in the majority shut it down.

“They made quite a show of shutting down these bills which was really devastating for the Knight family,” McCombie told WMAY.

Knight was assaulted while responding to a welfare call in September of 2017. She died of her injuries in February of 2018.

McCombie said she doesn’t care how the measure gets passed, or which party is the lead sponsor.

“I want this to be passed,” McCombie said. “I do find it interesting that with another murder, that now we’re going to see this passed.”

McCombie’s bill several years ago passed the House unanimously, but was never called in the Senate.

State Sen. Brian Stewart, R-Freeport, said in a statement it’s “terrible” another child protection worker has had to die to spark action. He’s had Senate Bill 610 filed since February 2021 and said Democrats are politicizing the effort by saying they are introducing penalty enhancements.

Stewart’s office said, “there is no reason why legislation he has sponsored during his tenure as a state lawmaker to protect DCFS workers – as well as similar measures sponsored by other Republican lawmakers – has routinely been blocked by Democrat leaders who are now suddenly trying to claim the issue as their own.”

“If Democrats had not delayed action on this issue for four years, these important protections would already be in place, and prosecutors could have been using them to go after the criminals charged with such assaults on state child welfare workers, including the person who allegedly attacked and killed Deidre Silas,” Stewart said.

Even if passed, McCombie said it may not be enough to deter violence against social workers.