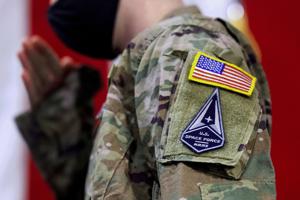 (The Center Square) – A state representative has filed a bill to add the U.S. Space Force to the list of Illinois specialty license plates.

The United States Space Force was founded in 2019 and is the space branch of the U.S. armed services organized under the Air Force.

Rep. Friess said that it’s time for Illinois to add a plate for Space Force members, like the rest of the military.

“All of the other branches of the military have their own plate as well and Illinois, at this time does, not have a Space Force plate they can offer,” Friess said. “So we are hoping to be able to offer that for members of Space Force.”

Friess said that his inspiration for this legislation was his appreciation for the military.

“This truly is not about the bill, but the plate, I just want people to understand and appreciate our armed forces,” Friess said.

Illinois has more than 50 different specialty plates available to residents for purchase. The state also has a military series that offers people 40 different military-related options to choose from.

Many options make donations to certain charities upon purchase, Friess said it’s still too early to tell if the Space Force plan will do something similar.

The bill is set for a second reading when lawmakers return.