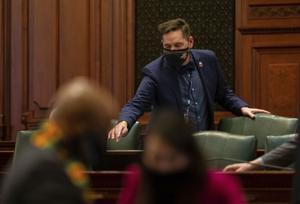 (The Center Square) – It’s unclear if one of the priorities for state lawmakers returning to the capitol will be to pay off outstanding unemployment insurance debt owed to the federal government.

They canceled session days for Tuesday and Thursday this week, but lawmakers will be in session Wednesday at the capitol in Springfield.

Lawmakers have days scheduled through April 8. State Sen. Doris Turner, D-Springfield, says there are some things she is focused on in this session.

“Some of them are around workforce development, agriculture, school safety is really kind of a big one and then some rural health provider shortages,” Turner told WMAY. “Infrastructure projects are always on everyone’s priority list.”

Turner said another priority is the budget.

State Rep. Tim Butler, R-Springfield, anticipates after the in-person session Wednesday, lawmakers may not come back in-person until next month. He’ll be watching this session for how Democrats, who hold veto-proof majorities in both chambers of the state’s legislature, will put the budget together.

Since the beginning of the pandemic, Illinois state and local government and private industry were promised $162 billion in federal tax funds for COVID relief.

One issue that’s unresolved, unemployment trust fund debt that ballooned during the governor’s stay-at-home order and subsequent economic restrictions from 2020 through part of last year.

Illinois taxpayers are already on the hook for millions in interest on the $4.5 billion unemployment debt. If it’s not addressed this year, it could be near $100 million in interest.

Comptroller Susana Mendoza requested the interest be waived because the pandemic continues.

“It certainly doesn’t hurt to ask and anytime that we can avoid having to pay unnecessary interest, which is nothing more than essentially setting money on fire, I would rather do that,” Mendoza said. “At least give it a shot.”

While Illinois Manufacturers’ Association President and CEO Mark Denzler said he supports the request, he doesn’t foresee it being granted. In the meantime, the debt will still be owed.

“And that’s money that can be better spent on things like health care and infrastructure and public safety and economic development,” Denzler told The Center Square. “Instead we’re likely to be using that to pay interest on a multi-billion dollar debt.”

One option could be for lawmakers to use billions in unspent federal tax funds held by Illinois, but it’s unclear if that’ll be prioritized when lawmakers return.

Employers warn if the unemployment debt is not addressed, taxes will be increased on job creators and benefits for unemployed workers will be cut.