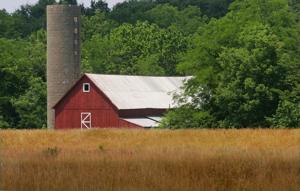 (The Center Square) – Farmland prices are expected to continue to rise in 2022.

That was the consensus of 93% of attendees at a recent University of Illinois farmland market webinar.

The dramatic 20% rise in farmland prices in 2021 makes Glenn Semple, vice president of Farm Credit Illinois, nervous – in spite of the fact that the farm economy is quite healthy, he said.

“I’m not saying land values are going to go down,” Semple said. “But if commodity prices were to decrease by 25% or 30% and interest rates were to go up by 1.5% or 2%, it would be challenging for land values to stay where they are at.”

For most buyers – the majority are investors and cash buyers – rising land prices are not an issue, Semple said. However, buyers on the margin could get into trouble if they overpay, he said.

“They are setting themselves up for the potential for it to be painful if land values come back 10% or 15% or 20% off of the highs and they bought at the high,” Semple said.

For cash-heavy investors looking to diversify their holdings, farmland’s attraction is that it is not directly correlated with the stock market or any other holdings.

“They are probably a little strong on what they are paying for the land as a long-term return on investment, but if a billionaire is buying farmland and paying a little too much for it, they won’t feel the impact to any great degree,” Semple said.

Semple’s concern is for the young farmer who is paying $2,000 or $3,000 an acre more for farmland than it may eventually be worth a couple of years down the road, he said.

Farmland values have a tendency to move in the opposite direction as interest rates, Semple said.

“We have been in a 40-year downtrend of interest rates. So land values have been in close to a 35-year trend upward,” he said

To determine land value, the calculation works like this: Take the typical cash rent of a farm and reduce that by real estate taxes and any expenses that an absentee landowner would have. Divide that by the interest rate on a 10-year treasury rate to get the price.

With interest rates at rock-bottom lows, the cap rate is down, so the same amount of income can support a higher land value.

“If interest rates were to go up significantly, absent an increase in the income stream generated by that property, land values would adjust downward,” Semple said.

The other driving factor in the price of farmland real estate is commodity prices, he said.

In the past 12 months, corn and soybean prices have skyrocketed. Eighteen months ago corn was nearly 50% less than what it is today. Soybeans were 35% less than what they are today.

“A large crop in 2022, where commodity prices come back to earth, would take some of the fluff or some of the air out of some of these farmland prices,” Semple said.