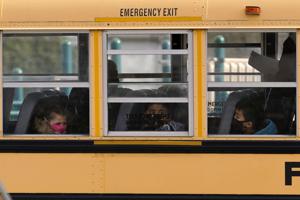 (The Center Square) – For most of the past two years, Illinois has had an indoor mask mandate in place. It’s enforced in schools with the Illinois State Board of Education threatening schools with punishment if they don’t comply.

The mask mandate was revoked for a brief period this year. But, Illinois Gov. J.B. Pritzker ordered them back on in indoor public settings including schools after first saying it was up to the local districts.

Pritzker ordered masks for all indoor activities in 2020. More than a year later, he let it expire as people were becoming fully vaccinated. But, then the CDC revised recommendations saying because vaccinated people were still spreading COVID-19, masks should be required in schools.

In July, Pritzker said the decision should be a local one.

“School districts and school boards will make decisions for the schools within their districts,” Pritzker said.

In August, he reversed course and reissued indoor mandates, including in schools.

“School districts are potentially going to be held liable if they don’t live up to the standard that is set by the CDC and by the state,” Pritzker said.

After a court slapped the Illinois State Board of Education down for treating private schools differently than public schools, the agency retooled and began the process of stripping recognition status from districts not mandating masks.

More than 700 parents have sued more than 140 districts over the mandates. Attorney Thomas DeVore had secured temporary restraining orders in similar challenges, blocking masks as a method of quarantine without due process.

“And I hope school districts will take it upon themselves to do what they think they need to do without being scared,” DeVore said. “I hope that that happens.”

Some districts have made masks optional all school year. In Hutsonville, School Board President Chad Weaver said the district will defend itself against ISBE’s threats.

“There was a community member who stood up and said ‘I’ll give $2,500 now to assist in this and go forward with it,’ ” Weaver said.

Other districts have since made masks optional.

It’s unclear when the mandates will be lifted. Republican measures at the statehouse to limit mask mandates in schools have not been brought up for committee hearings.