2021 Year in Review: Some pandemic policies continue after vaccine rollout in Illinois | Illinois 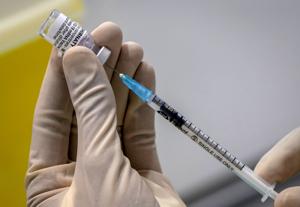 (The Center Square) – With vaccines available at the beginning of 2021, many thought the end was near for the COVID-19 pandemic. Now 12 months later, the pandemic continues.

In the final phase, conventions, festivals and large events could take place, and all sectors of the economy, including bars and restaurants, could return to normal operations. The problem for many was finding workers, an issue that persists.

Then in August, Gov. J.B. Pritzker warned that COVID-19 metrics were going in the wrong direction and that he may have to take action.

“I will remind you that if we are not able to bring these numbers down, if hospitals continue to fill, if the hospital beds and ICUs get full like there are in Kentucky-that is right next door to Illinois- if that happens, we’re going to have to impose significantly greater mitigations,” Pritzker said.

State Rep. Andrew Chesney, R-Freeport, didn’t see the logic in some of these decisions.

“It is all phony science, because they will host over 100,000 people at Lollapalooza, but then they’ll tell everybody they have to wear a mask outdoor at the fair,” said Chesney. “You just can’t make this stuff up.”

Illinois rolled out the second phase of a vaccination plan in January. Phase 1B included anyone 65 or older and front-line workers, roughly 3.2 million Illinois residents.

A vaccine was approved for kids aged 12 to 17, then in October, Illinois unveiled a plan for vaccinating children aged 5 to 11. Some parents have been hesitant. A study by Nick VinZant at QuoteWizard revealed multiple reasons why some parents are saying no.

“The main reasons that we found nationwide and in Illinois are people are concerned about the side effects, they’re waiting to see if the vaccine is safe, they don’t believe that their child needs to get vaccinated, they don’t trust the government, or they simple don’t vaccinate their children period,” said VinZant.

According to the Illinois Department of Public Health, as of December 13, 8,019,507 of the state’s eligible population is fully vaccinated, while 8.979,499 have at least one dose.

“The last year has been challenging for everyone and even now, marking the one-year anniversary of having the vaccine available, it’s still a reminder that we can’t let our guard down,” said OSF HealthCare Saint Francis Emergency Services medical director Dr. Victor Chan. “The vast majority of patients we see that are being admitted to the hospital are, unfortunately, unvaccinated. I encourage everyone who is able to get vaccinated or receive a booster dose.”