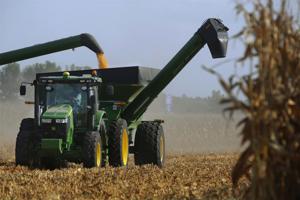 (The Center Square) – Farmers who need farm equipment can expect to pay top dollar and should be prepared to wait until 2023 for delivery. Jerry Beard, one of four partners in the Beard Implement Company in Arenzville, said that he could be making a lot more sales, but he just can’t get the products.

“It’s planters. It’s tillage tools. It’s combines. It’s tractors. I don’t think there is a favorite. They seem to pick on all of them,” Beard said.

Starting early in 2021, wait times for farm equipment started getting longer and longer. In spite of the pandemic, Beard said he did not see the shortages coming.

“Out here, we were all working. I was naive, thinking they were working…making these products, but they just weren’t,” he said.

Beard Implements is based on presales. Customers order equipment and expect to wait 9 months for delivery. Beard is now telling customers that wait times have doubled.

It takes a lot of planning to sell product 9 to 12 months in advance, he said.

“We are kind of used to it, but now we are out two years instead of 9 months to a year,” Beard said. “It was very frustrating at first but we are coming to grips with it. It’s just everybody. It’s Case IH. It’s Kinze, It’s Great Plains. It’s Kubota. It’s New Holland. It’s Westfield Augers. Bush Shredders. They all are battling the same issue: Getting products.”

Not only can customers not get farm equipment, when they do manage to get deliveries, the prices have gone up.

“I see some price gouging, which is very, very unfortunate,” Beard said. “The manufacturers say it is a supply-and-demand issue. And there is a lot of that. But I still think there is some price-gouging going on.”

Beard has been in the farm equipment business for more than 40 years. He is telling his employees to “stay positive.” It could be a lot worse, he said.

In 2013, 2014 and 2015, a drop in commodity prices left Beard and other farm equipment dealers with lots full of used equipment and nobody to sell it to.

“We all sat on iron for years and paid a lot of interest,” Beard said. “My Dad and grandfather said, ‘You can’t eat it. You gotta sell it.’ He kept telling me that: ‘You can’t eat the iron.’ I just don’t want to have a glut of used machinery like that again.”

In spite of the frustrations, overall, 2021 has been a good year for Beard Implements, Beard said. The company is having a Christmas party and paying year-end bonuses.

“I’m just hoping I can do the right thing for all my younger employees,” Beard said.