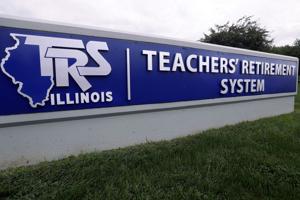 (The Center Square) – Audits of some of the state’s largest public employee pensions show increased funding ratios, but the state is far from out of the woods on the unfunded liability.

A state Representative isn’t holding out hope his fellow lawmakers will address the funding issues.

The Illinois Auditor General released audits of the Teachers’ Retirement System, the fund covering all teachers’ pensions with the exception of teachers in Chicago Public Schools. The audit showed a funding ratio increase from 37.8% in 2020 to 45.1% in 2021, a jump of 7.3 points.

The audit released for the State Universities Retirement System showed the funding ratio increased more than five points from 39% to 45.5%.

“We’re failing by less, right,” Batinick told The Center Square. “If you look at these as grades, 90% funded would be A, I think we should work toward 100% funded. 80% would be B and so on. We’re still getting a failing grade, though be it in the right direction.”

Both funds combined saw $16.4 billion in increased investments from the prior year. Batinick said investments shouldn’t be relied on as there could be investment losses in the future.

Other funds in a recent report from the Commission on Government Forecasting and Accountability showed all the state’s funds combined have increased the funding ratio, though it sits at 46.5% funded.

Batinick, who isn’t seeking reelection, said lawmakers need to pay down debt, not spend on new programs. He worries the past is prologue with what happened with the recent energy legislation.

“It was a $700 million bill to solve a $200 million problem,” Batinick said. “The [nuclear power plants] needed $200 million according to them to stay open but somehow we spent $700 million doing that. You know, that other $500 million that went to other programs and other things, imagine what that could do long term if you use that to cut away your pension debt.”

Batinick said not focusing on paying down the pension debt earlier rather than later means funding essential programs will continue to get squeezed out by increased pension payments.