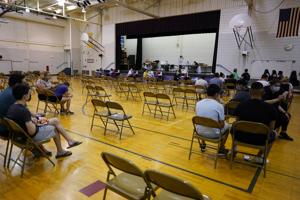 (The Center Square) – There were many challenges for Illinois school districts as they prepared to reopen in the fall of 2021.

Before the school year got started, Gov. J.B. Pritzker issued an executive order mandating masks be worn by students and staff, regardless of vaccinations status.

State Superintendent of Schools Carmen Ayala addressed the matter during an August board meeting in Springfield, which included protesters outside holding signs condemning the mask mandate.

“Masking works,” Ayala said. “It’s simple, easy and effective and it works best when everyone in the school building wears a mask.”

ISBE stated schools that failed to address deficiencies and submit a corrective plan would lead to nonrecognition, meaning a total loss of access to state funding and loss of the school’s ability to engage in any sanctioned athletic competitions.

As the school year got underway, signs that read “school bus drivers wanted” were a familiar sight throughout Illinois as school districts struggled to find bus drivers.

“Due to the driver shortage, we had to change from two-tier schedule to three-tier schedule to use drivers on multiple routes,” said Sharon Desmoulin-Kherat, Peoria Superintendent of Schools.

Vaccines were made available to school kids to avoid school shutdowns and a return to remote learning.

In its 2021 Report Card, the Illinois State Board of Education says the COVID-19 pandemic had a significant impact on Illinois schools last school year.

The data reveals lower enrollment numbers, higher rates of absenteeism, and lower rates of ninth grades on track to graduate.

“This past school year bore the brunt of the pandemic,” Ayala said. “More than 90% of Illinois students started the school year without access to fully in-person learning.”

Researcher Brenda Dixon said enrollment in Illinois schools was down 6% from the year before.

The numbers were more dramatic for younger students. Pre-K enrollment was down 17%, and kindergarten enrollment fell 8% from the year before.