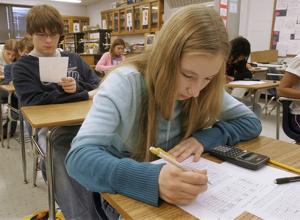 (The Center Square) – Educators are challenging the effectiveness of Illinois’ public school testing.

The Illinois Assessment of Readiness Test that Illinois school districts give every spring is a mandate that takes up valuable classroom time, said Mark Klaisner, president of the Illinois Association of Regional Superintendents of Schools. Illinois is obligated to give a standard state-wide test because Illinois schools depend on the $1 billion in federal funding that goes with it.

“You can’t just not have a test because Illinois does not want to sacrifice that money. We should get better – not just eliminate the test,” Klaisner said.

Illinois State Schools Superintendent Carmen Ayala has been advocating for a new approach and a better statewide assessment package for years.

Testing gives teachers data to evaluate how each student is learning, Klaisner said. Some kids may already be ahead of the curve and need a more challenging curriculum. Some children may be behind. When the teacher finds that out, the teacher can pivot and make sure that the children who need to catch up can do that.

“WIthout good assessment data, it’s hard to know when to support struggling learners or whether to accelerate those who have already mastered the standards for that particular grade level,” Klaisner said.

The way Illinois testing is done now, the state-wide standardized test happens in March. In some districts, testing disrupts classroom routine for two weeks – a drain on time that teachers resent. The results don’t come back until the summer. By the time the data is distributed and evaluated, the student has moved on to the next grade.

“It’s almost borderline ridiculous,” Klaisner said. “What we really need is streamlined testing that is more useful,” he said.

Klaisner does not believe that everyone understands what the Illinois State Board of Education intends to accomplish with the testing overhaul.

“People assume this is going to be another layer and then we would have way too much testing,” Klaisner said. “[Superintendent Ayala] wants an Illinois specific testing system that runs pre-school through grade 12. One that has a quick turnaround to get results very quickly so that we can change instruction as needed. And she wants multiple assessments per year.”

Klaisner said he has heard complaints from educators about them wanting the tests to go away.

“My experience – and I have been doing this 40 years – is that is what teachers want,” he said. “It would be less testing time. It would be fewer tests because districts would not have to do their own. It will be less expensive. And it will give results much more quickly.”

The Illinois testing overhaul will take three years, Klaisner said. A request for proposals from vendors will go out this fall.

“In FY ‘23, items will be designed, piloted and so forth. My latest understanding is that she [Ayala] is hoping for full implementation in the fall of 2023. So school year ‘23-’24,” Klaisner said. “If it is a system that is designed pre-k to 12, paid for by the state, and it is a continuous system that is aligned all the way through a child’s career, we could measure growth. We could help make decisions about curriculum as well as about individual students. In my opinion, ISBE is headed in the right direction.”