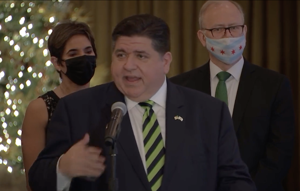 Lawmakers passed several bills in October during what is traditionally fall veto session. Friday, Pritzker’s office announced four of those bills are now law. Around a dozen bills remaining on his desk. At least one could face a veto.

Among the bills Pritzker signed Friday is House Bill 3490, which says if a restaurant includes milk as a default beverage in a kid’s meal, the drink must be dairy milk and contain no more than 130 calories per container or serving. The law takes effect immediately.

Another bill, House Bill 3372, aligns state procedures and occasions with federal law and practices pertaining to when the U.S. flag is flown half-staff, effective June 1, 2022.

He also signed House Bill 106 his office said “creates emergency rulemaking authority for the Secretary of State to extend the expiration dates of driver’s licenses, permits, and identification cards” and “makes changes to the Residential Sound Insulation Program.”

Among the measures remaining on the governor’s desk is Senate Bill 2778, which would give school staff the ability to take days off as administrative days, rather than sick days, if it’s COVID-related.

“We fear that one of the unintended consequences would be more closures and a reverting back to remote learning,” Agnos said during a committee hearing in October.

It was said during debate the Pritzker administration opposed the bill. If he doesn’t veto it before the end of January, the measure would become law.