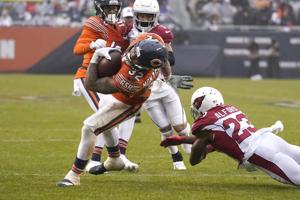 (The Center Square) – It was a record-breaking October for Illinois sportsbooks.

Retail and online sportsbooks combined to take in over $840 million in wagers, easily topping the record of $633 million set in March. Only New Jersey and Nevada took in more wagers.

October mobile sports betting handle was $803.4 million, up 41% from September. Mobile was 95% of the total handle in Illinois.

Joe Boozell with PlayIllinois.com said the state is full of sports fans, but the calendar played a part.

“There were five weekends of football, which usually there are four,” Boozell said. “Football is the most popular sport to bet on in the fall so I think it juiced it in every state.”

Also added to the mix is the fact that the NBA and NHL also began, and the major league baseball playoffs were in October.

Sportsbooks in Illinois profited $48.3 million, resulting in $7.9 million in tax revenue for the state.

Once again, DraftKings Sportsbook led the state in handle, but FanDuel led in revenue, a familiar trend for several months now.

There is still no online sports betting registration in Illinois. However, a measure is waiting for the governor’s signature that will end the requirement on March 5. March Madness, one of the biggest sporting events in the country, takes place soon after.

“There are a lot of annoying policies, like not being able to bet Illinois college teams and the in-person registration thing, but I think just the combination of the number of people in Illinois plus their affinity for sports and sports betting have overpowered those negative factors,” Boozell said.