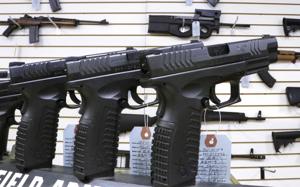 (The Center Square) – Illinois State Police are set to show some results to the Legislative Audit Commission with lawmakers reviewing comprehensive audits of the agency.

The commission meeting set for Thursday morning has, among other audits, a compliance audit of ISP for the two most recent fiscal years. There’s also a management audit of ISP’s handling of the Firearm Owner Identification Card and Concealed Carry License programs.

Of the applications auditors sampled, 43% of CCL applications weren’t processed within the constraints of the law.

ISP issued a statement earlier this week saying they’ve got the backlog down from nearly 140,000 to around 8,000 after streamlining some processes and hiring additional staff. The agency said its processing applications in 38 days.

“The Illinois State Police Firearms Services Bureau is committed to a firearms background check system focused on safety, not bureaucracy,” Kelly in a statement. “We want to make it easy on the good guys and hard on the bad guys.”

“Up until recently it’s done a fairly poor job of keeping up with the workload over at the FOID section, but they’re doing better, that’s the good news,” Boch told The Center Square. “The bad news is we still got a FOID card.”

While auditors say some people waited up to a year for their card, Boch said some Illinsoians waited well over a year and there’s not much remedy to secure those rights.

“People can’t really go to court on it because the suit will be moot before the court ever has a hearing on it,” Boch said. “So people really have no place to go other than just to wait for the state to finally catch up when it comes to fulfilling their duties under law.”

“And I think sooner than later the FOID card is going to be ruled unconstitutional, but until we get to that point, we’ve got to live with what we’ve got,” Boch said.

Illinois is one of three states that require residents to get a state-issued ID to own a gun.

“ISP management indicated monthly reconciliations of inventory entries to equipment expenditures were not performed due to a lack of resources,” the audit states.

There was also some questionable bookkeeping.

In one finding, “auditors noted $2,335,955 of unknown activity which was not reported on ISP’s FY20 schedules of additions, deletions, and transfers. ISP was unable to identify the unknown activity.”

Another audit finding was weaknesses in cyber security programs and practices.

Though it wasn’t mentioned in the audit, a recent hack of the state’s FOID database exposed several thousand users’ information.

Other audit findings ranged from not having enough bilingual frontline staff, the agency not enforcing provisions of the Smoke Free Illinois Act, not reporting arrest-related deaths in a timely manner and others.