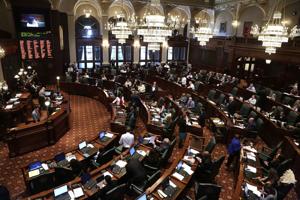 (The Center Square) – Hearings into the fate of the state’s legislative maps begin Tuesday with deadlines for upcoming elections looming.

Democrats at the statehouse passed partisan drawn maps for state lawmakers for the next ten years. The first maps they drew in May and Gov. J.B. Pritzker enacted in June were based on estimates.

Democrats revised those maps in September after the final Census data was released. Pritzker then enacted those maps. Both were challenged by statehouse Republicans, the Mexican American Legal Defense and Educational Fund and the NAACP.

A federal court found the Democrats passed erroneous maps based on estimates and said revised maps passed in September may be tweaked.

“The issue with it is that it dilutes Latino voting strength and creates a racial gerrymander against Latino voters in House District 21 and Senate District 11,” Herrera told The Center Square.

The NAACP had similar concerns for how the maps dilute other minority groups.

“To summarize, [NAACP’s] remedial districts remedy the constitutional and Section 2 violation by drawing [districts] based on race-neutral, traditional redistricting criteria,” according to the NAACP filing. “The remedial districts remain faithful to the legislature’s non-racial priorities for the Metro East region … preserving communities of interest, and minimizing the splitting of municipalities.”

Each plaintiff group has provided their proposals, to which Democrats responded in legal filings. The three-judge federal panel begins a full day of hearing arguments from litigants Tuesday in Chicago.

The offices of House Speaker Emanuel “Chris” Welch, D-Hillside, and Senate President Don Harmon, D-Oak Park, didn’t immediately respond when asked by email what the leadership hopes to get out of the hearings starting this week.

State Rep. Tim Butler, R-Springfield, last month said the courts are sensitive to the time crunch to get maps in place.

“The circulation for offices for next November will begin in mid-January, Jan. 13, so we need to have this finalized soon so folks can go out and circulate petitions to get on the ballot and the court understands they need to respect that timeline,” Butler told WMAY.

The legislative maps deal with statehouse seats for the Illinois General Assembly. They are not the Congressional district maps Democrats passed along party lines and the governor enacted last month.